I typed the first part of this post on a Saturday night in a hotel business centre in Collingwood, Ontario.  I was intending to finish writing about the entirety of the Saturday, but the slow net connection and my own exhaustion made it impossible.  As I type this now with borderline frostbitten fingertips, I know I have to break the tale of our crazy Collingwood weekend up into more than one post.  For now, you'll have to settle for my contribution to the Lakeshore Runner Tri-ed It Tuesday linkup: a recap of our first snowshoe race. 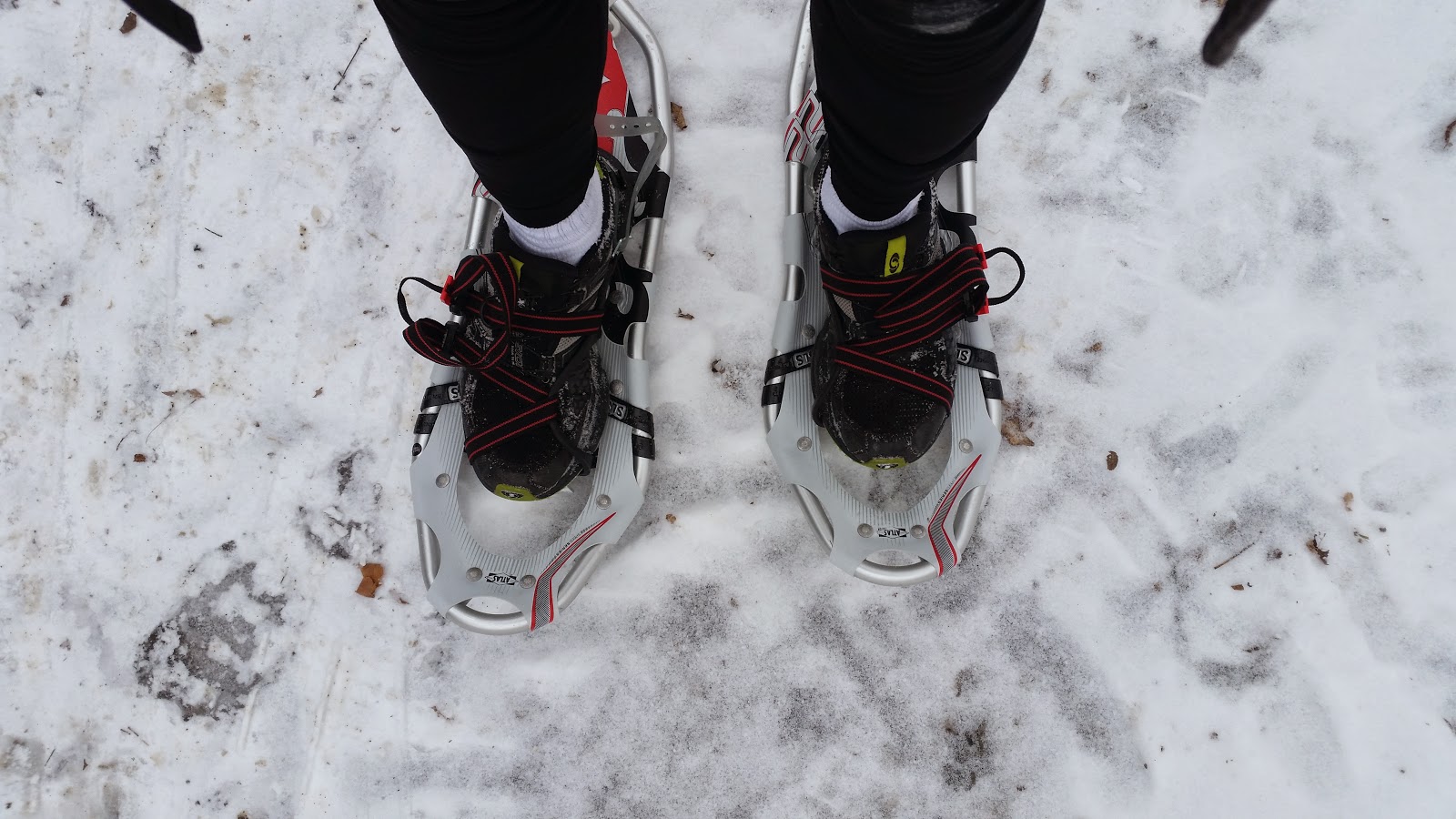 I've wanted to take part in a snowshoe race for some time now.  I've owned my own snowshoes for over a year, but I haven't gotten many chances to get proficient with them. This year I missed two chances to take part in snowshoeing events run by Personal Best at Albion Hills.  Not only was the venue close, but vendors were allowing you to try on snowshoes for demonstration purposes, and they had children's sizes, so I ended up getting Shark Boy all psyched up to, only for us to miss our shot by a few minutes each time.  As a family, we made cross-country skiing the top priority weekend outdoor activity, and snowshoeing kept getting punted.

Before we were married, my wife and I used to love coming up to Collingwood for both cross-country and downhill skiing, and even with two kids, we still try to make the effort.  Knowing that we wanted to make such a weekend happen, and since I found the Romp To Stomp Snowshoe Race (benefitting the fight against Breast Cancer), I had a way to kill two birds with one stone.  All I had to do was pack cross-country ski gear for four people, downhill gear for four people, the Chariot, my snowshoes, plus swimsuits and clothes for an overnight stay into my car...

We've had to deal with enough chaos in our life (e.g. the Lightning Kid getting sick in the last minute) that I was unwilling to pre-register; I just have to live with having every plan be tentative.  I had packed the car the night before, but when I got outside on Saturday morning to pull the car out of the garage, I saw it was snowing.  Heavily.  This was going to impact the ideal schedule... not catastrophic, but chaotic as the norm.  After a 2 hour drive, we were passing through Collingwood on the way to Scenic Caves, where the event was being held, and we saw that there was parking for the event in town with shuttles to Scenic Caves.  This didn't bode well, since we knew we wanted to park there so we'd have access to both the snowshoe event and cross-country ski trails afterwards.  Luckily, the staff let us park in their lot, even though it was off-limits to race participants.

The building housing the registration desk was far from just about everything else, but luckily (again) Shark Boy and I made it in time.  It was a bit of an ordeal filling out at least 3 different forms, and the network connection was too spotty to make a credit card authorization for my $42 (plus tax) registration fee.  Somehow, we still got out with our race bibs pinned to our jackets and I got a demo pair of Tubbs (the main sponsor) snowshoes for Shark Boy, and I still had time to change into my Salomon trail runners and grab my own snowshoes. 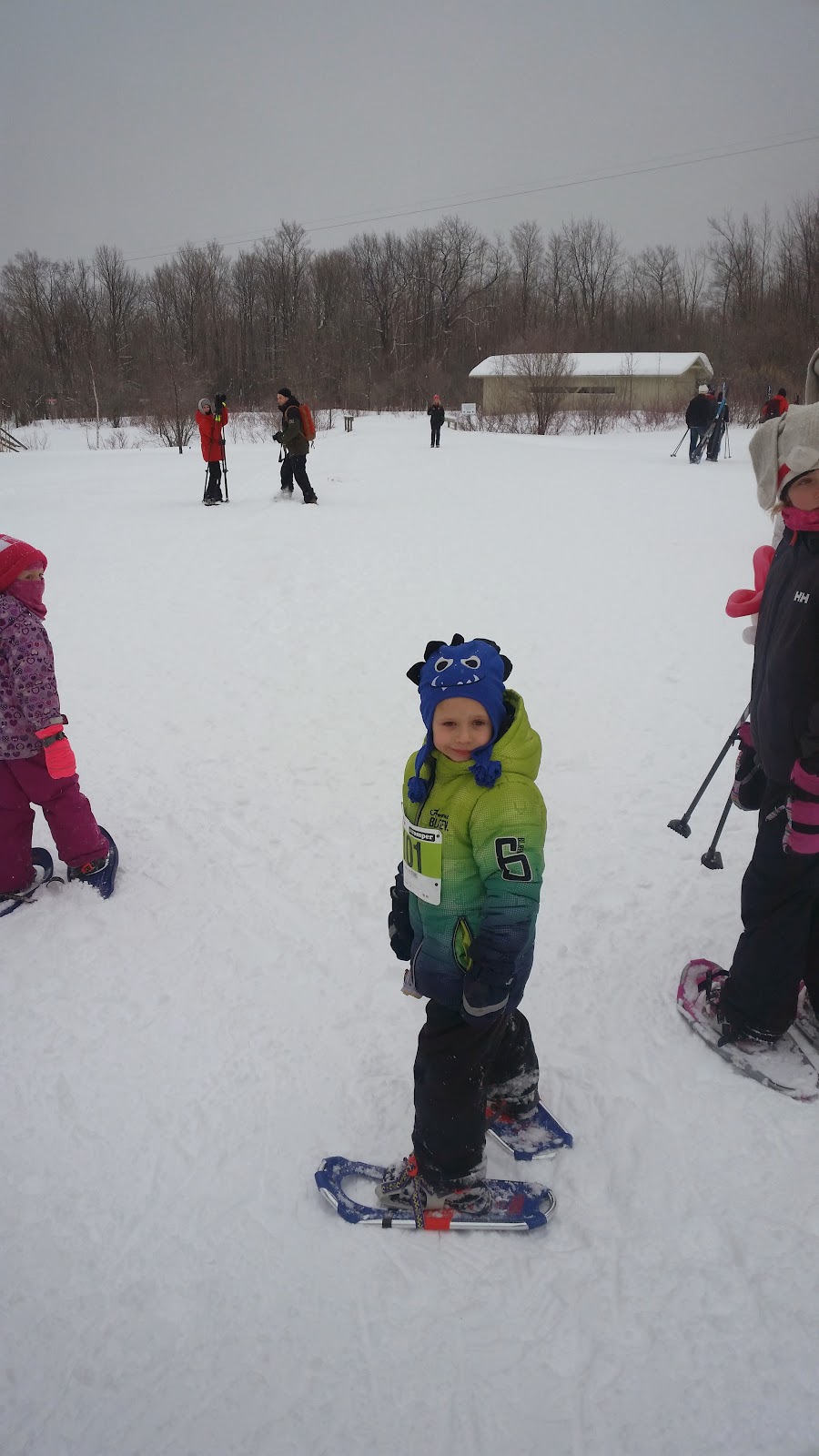 The 'Lil Rompers' race took place first.  It was a very short out and back of only a few hundred meters; a nice little sprint for the little ones to get their energy out and try out what it was like to run in snowshoes.  Shark Boy did great, and took to snowshoes like a Shark to water (where do you think we get that nickname from?).  He was actually last to cross the finish line, but he was one of the smallest/youngest kids, and there were several who gave up crying.  He always puts on a brave face, but I found out later that he was actually a little upset at coming in 'last' and when I spoke to him about it on Sunday night, he also complained of getting snow kicked into his face (which I would also experience at the start of my own race).  I explained about how his not giving up and crossing the finish line made him a hero to me, and it's one of the things I love about him most.  I hope that's worth a gold medal to him... 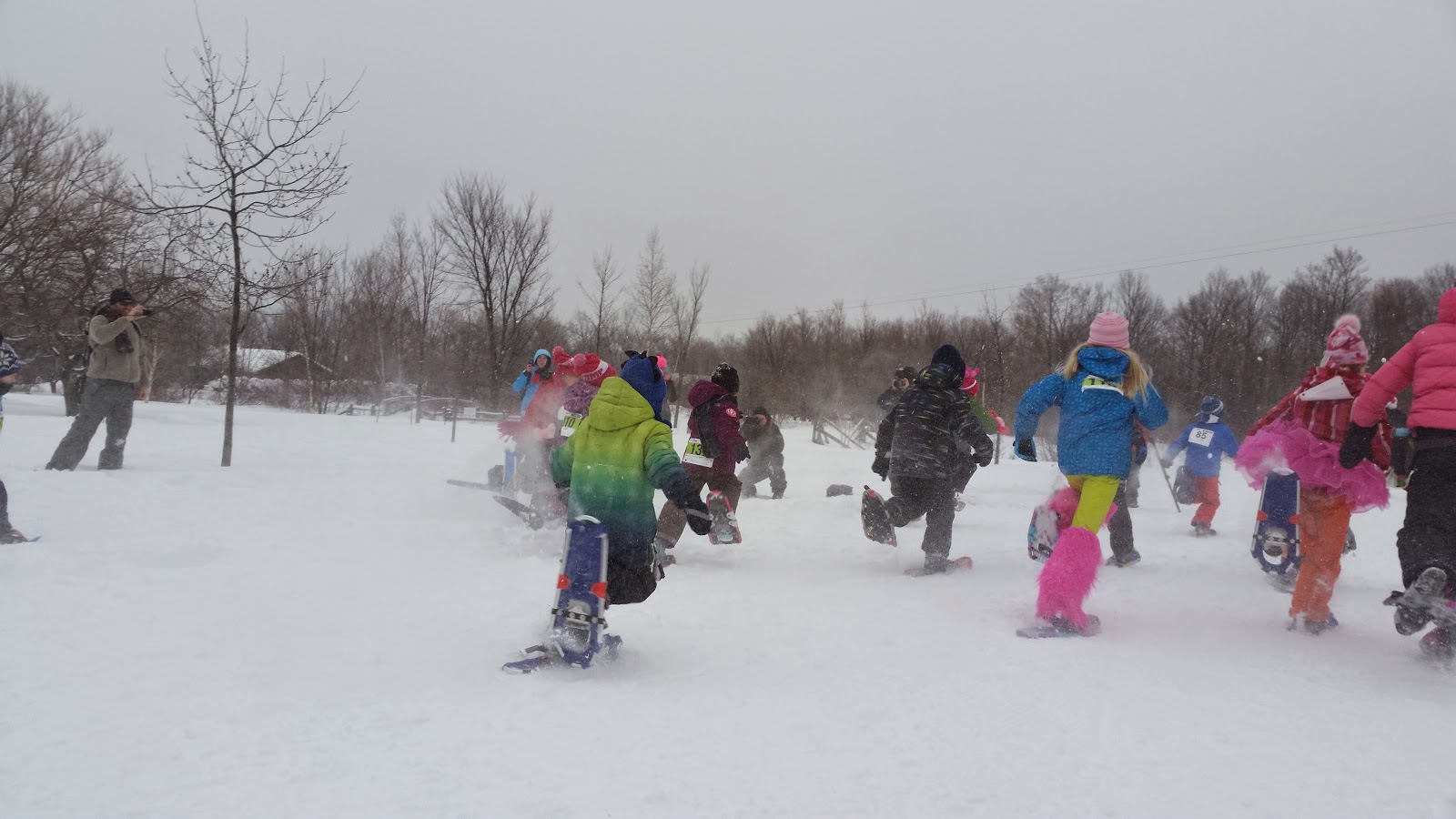 If you see a lot of pink in these pictures it's because the Romp To Stomp Snowshoe series benefits the Canadian Breast Cancer Foundation.  So in addition to being a lot of fun, they're also helping out a great cause. 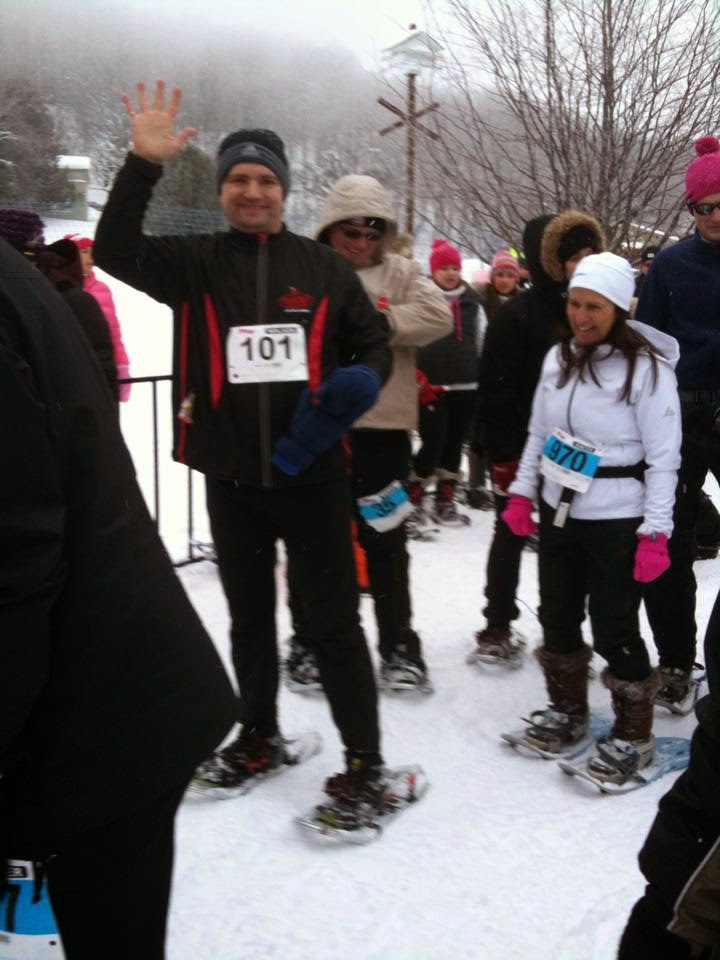 As I lined up for my own race, of course a few nerves kicked in.  I asked some of my fellow participants if they knew what colour our trail (3 km race, there was also a 5 km race and 3 km walk available) was blazed.  Someone pointed out to me that I was wearing a Walk bib as opposed to a race bib.  I needn't have worried, as there were pink and blue arrows spray painted into the snowbanks and marshals at every possible fork to keep anyone from getting lost.  As we took off, I had only 3 people running in front of me, but their intensity was enough to kick up a good cloud of powder.  As I settled into a pace I thought I could maintain, we got a little spaced out on the trail and I stayed firmly in fourth place.  Scenic Caves is on the Niagara Escarpment, and as such the trails are made to start with a lot of climbing (which is better than ending with a lot of climbing).  I’m familiar with the terrain from cross-country skiing here over the years, but I’m not as competent at pacing myself on snowshoes, and try as I might to climb slowly while still ‘running’ I found myself taking it back to a walk.  I blame peer-pressure, as the other front runners were doing it too, so it only seemed sensible.  The snowshoes have little teeth that make traction a non issue, so every step was efficient and meaningful.

What I noticed about the snowshoe trails (when they deviated from the ski trails) is that they can go into much denser vegetation since there’s less chance of quickly careening off trail into a tree.

Whoever was in first had left the rest behind, but I kept seeing racers 2 and 3 a little ahead, and some of the volunteers even egged me on to try and catch them.  On uphills I felt like I was gaining ground, but on every descent they’d seem to disappear.  I eventually learned that I can lean into a downhill on snowshoes much like when I run normally. 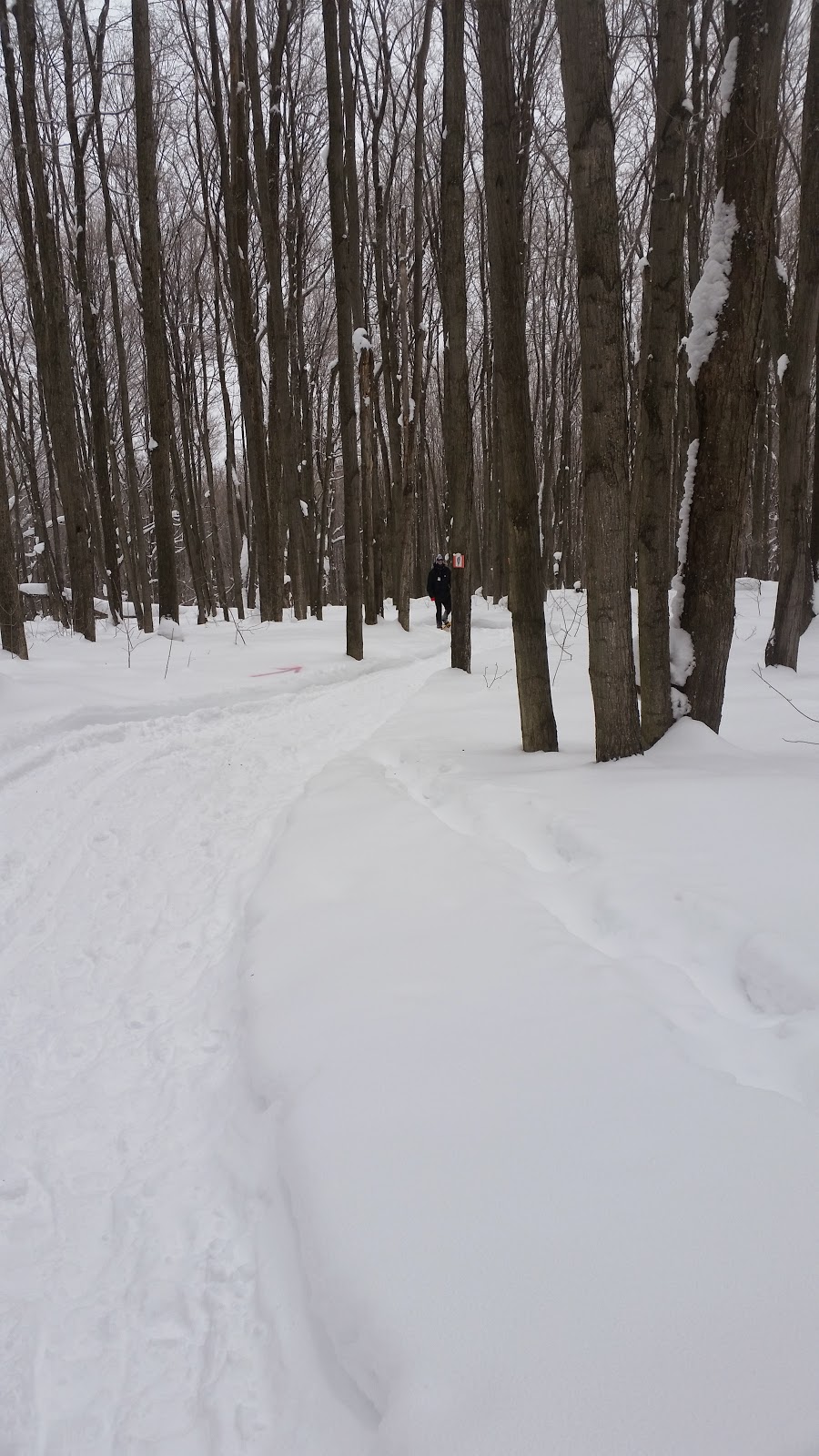 Another way I might have been losing ground was that I stopped to take pictures.  When it came to crossing the big suspension bridge, I simply had to.  It has a great view, and luckily I’m not afraid of heights...


On the final kilometre of the race, I finally began to gain ground on racers 2 and 3 who seemed to be sticking together, with one always a little ahead of the other.  There was one last big climb that I managed to maintain enough intensity on to pass them both.  I still needed to drop back into a walk before the top, but I figure my longer legs kept me ahead on a stride by stride basis.  My only regret about this race was not wearing my heart rate monitor strap; I think it would have been interesting to know exactly how hard I was going.


Once I crossed the finish line, they let me know I came in second place!  Not bad for someone racing in snowshoes for the first time!  I think I heard them announcing some of the podium places for both 3km and 5km racers later on, but I was busy with the family at the time.  We might have been chowing down on Maple Lodge Chicken Dogs which were available for nothing but a donation to Breast Cancer awareness.  They were tasty!  If it wasn't the chicken dogs, then we were out continuing our adventures on the cross-country ski trails, which will be the first part of Chapter 2 of our Collingwood Adventure. So I’m leaving you with a bit of a cliff hanger... see you next time!